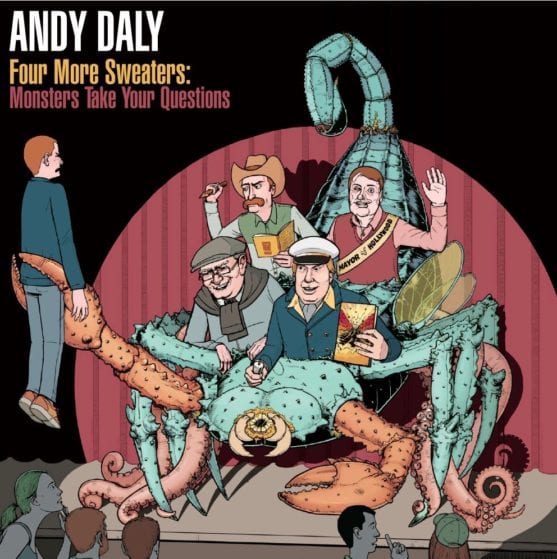 The prospect of committing an entire comedy album to doing characters has always been a risky one, which is why only a few comedians attempt it and even fewer actually pull it off. One of those comedians is Andy Daly who released his groundbreaking album 9 Sweaters featuring Daly’s repertoire of characters that are so darkly funny about 12 years ago.

Now in 2020, a time when the monsters are more out in the open than they have been in recent memory, Andy Daly has just released his follow-up Four More Sweaters: Monsters Take Your Questions, which features four, a la the album title, monsters of different ilks displaying their horrific wares in the most ridiculous light possible. Thanks to Daly’s deft craftsmanship, showing the darker side of humanity via the Poet Laureate of the West, Dalton Wilcox, the seediest man on Broadway, Don DiMello, Honorary Hollywood Mayor Chad Gardner, and Scientology creator himself L. Ron Hubbard is so subversively hysterical. Daly takes great care in crafting their monologue, respective worlds, catchphrases as well as honing in on many of their worst, out-of-left-field details about them. Each of the four characters taking questions from the audience ratchets up the absurdity even further. Daly takes license to get even more mischievous when the questions are particularly innocent, but always makes sure to show how terrible such people really are and are worth ridicule via cackling by any and all listening to Four More Sweaters.

Andy Daly’s Four More Sweaters: Monsters Take Your Questions is out now, fresh from AST Records. Get it/listen to it on multiple platforms here.