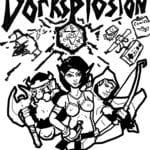 When I was a little kid I got a “Death Dealer” Frazetta t-shirt with my own allowance money and hid it under my bed. I would take it to school in my back pack and then change into in the bathroom.

I felt so bad ass. I was still at the age where I just naturally assumed everyone would be into the same things I was into because the shit I was into was so awesome. This was not the case.

I grew up in the south. So not only did people think I was a dork, but they also thought I worshiped Satan and told the principal on me. I got called into the principal’s office and they went through my back pack and found a bunch of “Museum Replicas” sword catalogs that I had circled all the swords in that I wanted.

In  retrospect, I am sure that the principal thought I was going to go postal really slowly with a sword or something, but the problem was, I was waaaay to young to even really carry a big ass sword, not to mention that this would be the most unrealistic threat to an elementary school ever.

My parents had to come pick me up AND they called the Karate School that I was taking karate it and I had to have a one on one with my sensei about how “real karate masters never use weapons…even if they use them in Ninja Turtles.” Somehow the school had lumped going postal, Dungeons and Dragons, heavy metal, karate and Ninja Turtles into one problem…a fat kid wearing and awesome t-shirt.

I miss those days.

Do you have an embarrassing dork related story?