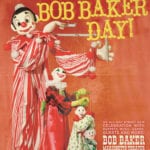 The Bob Baker Marionette Theater will actually be shutting down the street around the venue in celebration of the 4th Annual Bob Baker Day this weekend.

That does means that there will be puppets in the streets!

Oh, did we mention that pretty much 98% of this is FREE!

The Daily Show is really going all out this election year.

On top of a week of coverage at both the DNC and RNC, having exclusive Snapchat content, and integrating Amazon’s Alexa into their coverage, one of the most exciting things that The Daily Show with Trevor Noah will be doing is an actual carnival at this ‘carnival’ of a presidential election.

Specifically, at The Republican National Convention next week in Cleveland, Comedy Central will have a whole set of carnival style games that are inspired by the insanity of the campaign trail this year.

-RUN FOR THE BORDER: As the marquee activation, “Run for the Border” offers attendees a chance to put their political passion to the test with an interactive game that’s fun for everyone. The activation is oriented in front of an expansive digital projection and features a row of seats equipped with hand controls that propel on-screen avatars in a race to the nearest border.
-THE HALL OF NOT PRESIDENTS: Puts a political spin on fun house mirrors, featuring a hallway full of satirical hairstyles and pantsuits, commonplace to the political landscape.
-THE YUUUGE WALL: Bringing the issue of border control to life with a literal huge wall installation. Complemented by politically-inspired graffiti penned by Cleveland-based artists, participants will also have the chance to leave their own mark.
-GRAB-A-DELEGATE: Participants compete for bragging rights by stepping into a glass wind machine booth and tasked to grab as many paper props as they can (think faux “dirty money” and one nominee’s “deleted emails”).
-HOT BUTTON ISSUES: This whack-a-mole inspired game gives players a fun way to drop the proverbial (foam) hammer on politics and punditry antics, from gun control to climate change to immigration.
-THE DAILY SHOW DESK: The best seat in the house! Positioned as a lounge area with a full-sized replica of Trevor Noah’s “Daily Show” desk, this activation is designed for shareable photo moments as attendees can snap photos from Noah’s chair.

We’re guessing this will be one of the least crazy things that will be at the RNC.