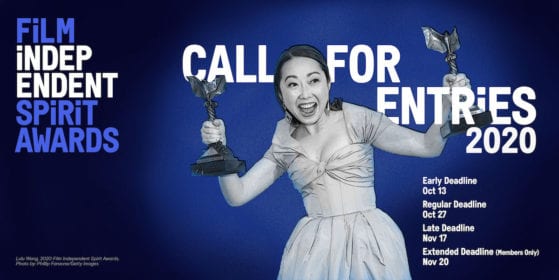 The 2021 Spirit Awards Is Calling for Entries

The Spirit Awards attempt to represent the best of the indie side of film and, for the first time starting in 2021, “the indie side” of television. As such, comedy tends to get more of a fair shake than it does with the Oscars and, it’s clear that some of the best television in recent years has come under the umbrella of comedy.

Also, given the closure of movie theaters, many a movie, whether indie or not, has had to opt to release via a streaming service, which might very well open the berth of consideration for films a little wider than it has in the past (most big time film awards require entries to have screened at a brick-and-mortar movie theater for an entire week). It would seem that the requirements suggest that’s the case for both film and television as well.

So, if you’ve got an indie film or brand new TV series that got put on a streaming platform where people had to pay to watch it, you might have a shot at getting nominated for Spirit Award  (also, the submission fees for the Oct. 13th early deadline start at $300 for Film Independent Members and $350 that aren’t).

Get more info and submit to the 2021 Film Independent Spirit Awards here.