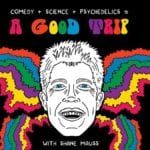 Shane Mauss is bringing his nationwide touring show on psychedelics to the beautiful Largo at the Coronet Theatre next week, Wednesday, February 1st at 8:30PM.

Not only has Shane toured dozens and dozens of cities with this show and is a seasoned comedian worthy of such a lengthy tour, but he has studied thoroughly up on the subject matter probably more so than you or anyone you know (if you know what we’re saying).

Anyhow, tickets are $30 and you can (and should) get them here.