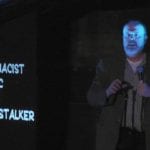 Rick Overton opened almost every show at the Edinburgh Fringe, and gained a following for his mad Set List skills.  Rick will also be opening the shows at Flappers Comedy Club in Burbank EVERY Sunday at 9pm starting Sept. 18.

Hear that? Set List is back in town after touring the world and Rick Overton’s opening every show at Flappers on Sundays. It’s improvised stand-up the way it should be done and none of you should miss it.