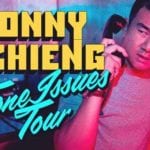 Ronny Chieng who you’ve probably seen and enjoyed multiple times on The Daily Show with Trevor Noah and Crazy Rich Asians is capping off his international stand-up comedy tour Tone Issues by taping it as a special at Glendale’s Alex Theatre.

Chieng’s rants and the style in which he taps into his own rage is such a delight to watch and relish in, no matter what he’s talking about. There are two shows, both on Fri. Sept. 27th, 7PM & 9:30PM for $20 a pop. Get them here and here respectively.