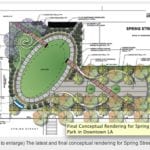 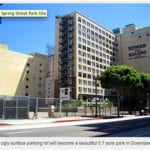 is going to go here.

If downtown LA keeps up at the rate it’s going, I’m actually going to want to live there in a year or two. Now if we can just get Hollywood on board for their Hollywood Central Park – a plan which would cap the 101 freeway and put a park over it in between Hollywood and Santa Monica Blvd. It would take a long time but the plan is so fucking cool. Also in the works – a plan to turn the LA River back into a (gasp) River.

I love how LA is trying to create more public spaces. Griffith park is great, but there’s few green public spaces interspersed throughout the city. I love LA, but it’s a city you have to learn to love. If some of these plans actually materialize, LA can truly become an amazing city with a high quality of life.

I’m sorry everyone. I read this and thought, “So there will be more places where we can do a comedy show, right?”