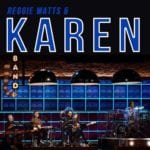 Opportunities to see Reggie Watts and his handpicked Late Late Show band “Karen” jam out in between Reggie riffing wherever his wondrous imagination takes him don’t come around too often.

Honestly, even if it did, you shouldn’t waste an opportunity to see Watts and Karen bring the best vibes, oscillating between music and comedy, the whole night.

So, snag tickets now for $20 (they’re $25 day of) to see Reggie Watts and Karen at Teragram Ballroom near DTLA at the end of this month, Thurs. Jan. 30th at 9PM.