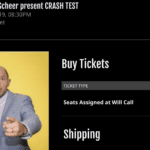 Once upon a time, Rob Huebel and Paul Scheer used to take the stage together at UCB to do something called Crash Test. It was a live show where Paul and Rob got to do whatever the hell they wanted (i.e. an aggro-version of musical chairs, accidentally talking to celebrity assistants in the crowd, going over Vin Diesel’s real FB page, etc.) in between great stand-ups. Eventually, that led to an entire comedy special that they did on a glass bus.

It has been more than couple of a years since Huebel and Scheer have dove into this wondrous chaos, but that’s all changing as they will be reprising Crash Test again at Largo Thurs. May 30th at 8:30PM. Go get your tickets now as we have no doubt that this will be something special.