1) Comedy Central is catching on to the “book game” by starting their own imprint.

2) Let us not forget that Lenny Bruce paved the way for a lot of comedians to do what they do today with the new documentary Looking for Lenny (even though that “street” seems to be still be “taped off” to this day).

3) Recently on late night, get some great dick jokes from Eric Idle on Ferguson and Ken Marino on Conan, then Don Cheadle, as you’ve never seen him, seriously, being absolutely ridiculous on Fallon.  Tonight on late night, Tom Lennon will stop by the Late Late Show with Craig Ferguson (CBS 12:35AM), Ed Helms on Jimmy Kimmel Live (ABC 12AM), the wonderful Matt Knudsen doing a set on Conan (TBS 11PM), and none other than William Shatner will be on the Colbert Report (Comedy Central 11:30PM).

4) Adult Swim is possibly getting more absurd with developing a new show from ATHF Creator and coming out with a show where Odd Future does what they want.

5) Garfunkel and Oates gets our vote for Best Comedic Musical Performance at an Awards Show with their song at the Independent Spirit Awards. (that’d be an Emmy category, right?)

6) For those of you that thought that John Oliver’s NY Stand-Up Show was cancelled (and some people did) because you hadn’t seen on the air in awhile and all the other stand-up shows coming on Comedy Central, it’s absolutely not. 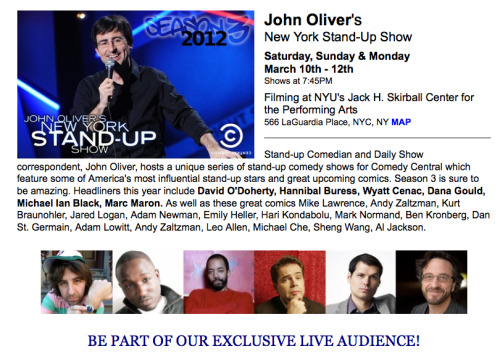 7) Those outside of LA and NY are in luck, comedy wise, as Bill Burr, Nikki Glaser, and Nato Green are all taping albums/specials very soon.

8) Congratulations to the Creek and Cave on getting their Kickstarter funded! There’s still time to donate if you’re feeling extra generous, by the way.

9) Our picks for the 5 Most Intentional Funny Videos this week for the Nerdist span all the way from Kenny Powers to James Urbaniak. Check it out.

11) Do not start a live comedy show in any of these places.

12) On this episode of King Temp, Nick Turner can’t take a compliment, even a small one.

13) Comedy is probably the only art form where unapologetic stupidity can be appreciated as brilliance.