2) Last night, we found that no one will ever intro a clip on a talk show better than David Cross did on Conan. Tonight that claim will probably stay true (watch the clip to see what we’re talking about) Tina Fey will be on Late Night with Jimmy Fallon (NBC 12:35AM) and Billy Eichner will be on Conan (TBS 11PM).

3) The Bridgetown Comedy Festival is open for submissions and if you’re a comedian, you’ll want to spend your gas money for the next few days on this instead of drinks, unnecessary nostalgia, or anything else.

4) The bi-weekly stand-up show in Echo Park, Brunch at the Park Restaurant, sadly came to an end last night. Still, there are worst ways to end a show than have Sean Patton close it out. 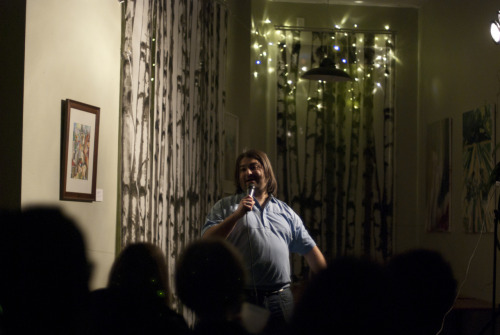 5) Another thing to submit to that you’ll enjoy: The LA Film Festival.

6) Never seen the late Angelo Bowers do a set to see what everyone was talking about? Laughspin fixed that.

7) Two of comedy’s most prolific photographers Robyn Von Swank and Liezl Estipona are selling prints of their work here and here, respectively.

8) On Episode 6 of This Better Be Funny, the podcast we chose to not be about comedy news because we got that covered here, hosts Jake Kroeger and Jeremy Paul try to have comedian Joe Braza as a guest, but get (thankfully) interrupted by other comedians, car sales, and other comedians leaving.

10) Every Coachella joke ever: COACHELLA! WHY DO I FORGET THAT YOU HAPPEN AROUND THE SAME TIME EVERY YEAR AND PLAN SOMETHING I CAN’T GET OUT OF?