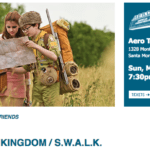 As The Oscars tonight, we thought it’d we should give you a heads up on one of the few Oscar nominated comedies over the last several years (tonight’s a little different as Lady Bird, I, Tonya, The Big Sick, The Disaster Artist, Three Billboards Outside Ebbing, Missouri, The Square all scored nominations this year).

So, Wes Anderson Oscar nominated Moonrise Kingdom is playing at The Aero Theatre in Santa Monica a week from now. On top of it being another critically acclaimed part of Wes Anderson’s filmography, it’s also an escapist comedy adventure to a fictional time and place if that’s something you need right now for some reason.

Tickets are $12. Get them and more details here.