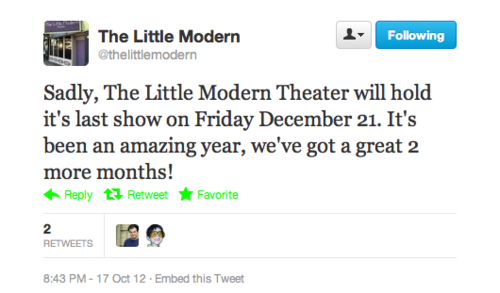 Coming short of their Indiegogo goal, The Little Modern Theater, host to many wonderful independently produced comedy shows, stand-up, sketch, improv, and everything in between is set to close at the end of the year. While The Complex (a collective of theaters where the Little Modern is located) is looked down upon by the theater community in LA, The Little Modern was quickly becoming a great place for some of the city’s funniest folks to have a small intimate show.

So catch shows for the next couple of months while you can because you can catch great shows like Picture This, 11th Hour Show, Hamclown, and more. Also, there could be many much worst ways to greet the end of the world on Dec. 21st than marking the final evening of The Little Modern Theater.