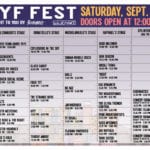 This will be my seventh year involved with setting up the comedy show for FYF. Glad to have been a part of it since the get go.

Matt Dwyer (How I Met Your Mother)

Emo Philips (No need for an introduction. We love him- FYF)

The comedy performances are presented by THE MELTDOWN.

This is the FYF comedy line-up. This will be posted more times in case you’re too lazy or non-committal to click this link.