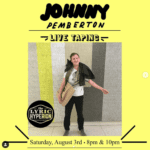 Johnny Pemberton, for as long as we’ve known him, has been one of the most dynamic, daring comedians around. We’re never quite sure what he’s going to do, but that’s kind of the thrill that Johnny brings with whatever he’s doing whether playing his vast array of characters, when he’s doing stand-up, etc.

So, suffice it to say that you should go to Johnny’s live taping next week at the Lyric Hyperion. It’s only $5 and there’s an early and late show. Get details and tickets here.