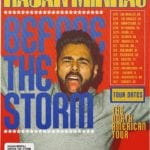 Hasan Minhaj is set to go on a big ol’ North American tour starting this August. Called Before The Storm, Minhaj will actually be kicking off his tour in LA with three shows at the Theatre at the Ace Hotel in DTLA.

Tickets are $30-$75 and you should get them sooner rather than later as we can imagine that these will sell out.