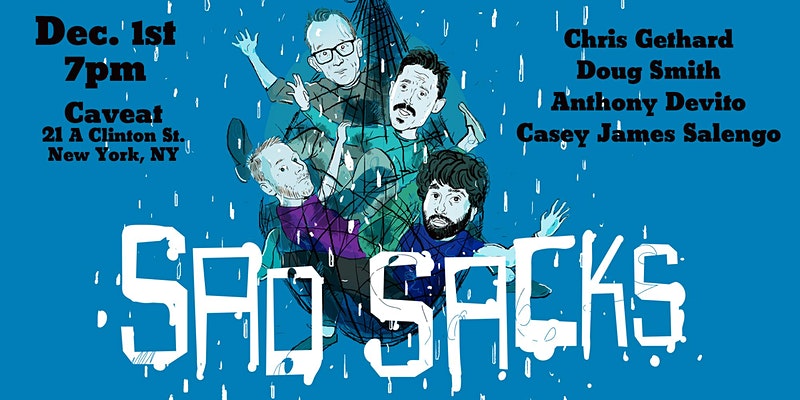 With the exposure of solo shows from the UK and Australia and the ever changing DNA of comedy specials these days, we hope that you’ve expanded your consideration of what constitutes an hour of comedy these days. Certainly, in America, it can be quite difficult to develop such material as there has been historical expectation at comedy shows of cut and dried jokes, honed or raw. The inclination towards vulnerability in comedy, even though that was Richard Pryor’s bread and butter, has only really become a trend over the last decade.

With that in mind, it’s important to have space for such genre bending, more emotionally deep works of comedy that fall into that age old label of “solo show”. Thus, Sad Sacks @ Caveat in NYC’s LES is born. Celebrated and seasoned comedians Chris Gethard, Casey James Salengo, Anthony Devito, and Doug Smith all have their solo shows that they’re working on and will be performing excerpts of it together at this very special showcase. It’ll be a comedy show that has the whole range of emotional color that, we’d argue, makes for a much more enriching experience.