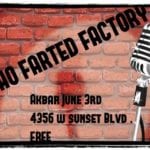 For this month’s Entertaining Julia @ Akbar, The Puterbaugh Sisters are spoofing “a bad comedy club” and presenting “The Who Farted Factory”. That being said, they have a hell of a line-up including:

Whether you’ve been coerced into buying two drinks/items to be yelled at for sitting up front or not, The Who Farted Factory ought to be a good time.

The show is at 9PM this Sunday and FREE. Get more info here.