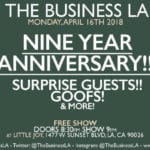 From a show beloved in SF, then expanding to LA and NYC, then all uniting under the show’s home in LA, The Business has gone through and survived more than most indie comedy shows around, not to mention that they’ve kept it going for nine years.

They (that’s the current, rambunctious Business crew of Anna Seregina, Sean Keane, Chris Garcia, Bucky Sinister, and Megan Koester) will be honoring their 9th Anniversary this Monday at Little Joy. Per usual, admission is free (though we suggest you get there early if you want a seat.