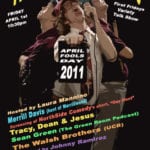 An evening of comedy and chat!
First Fridays is a monthly comedy variety talk show that’s part of the LA Comedy Festival’s 365 Series, and features a diverse lineup of stand-up, sketch and film hosted by Laura Mannino and produced by Johnny Ramirez.

I will bet the price of admission this will be much more fun than KROQ’s April Foolishness, which doesn’t even take place on April Fool’s Day.