YouTube Music and NIVA Partnering to Save Live Venues 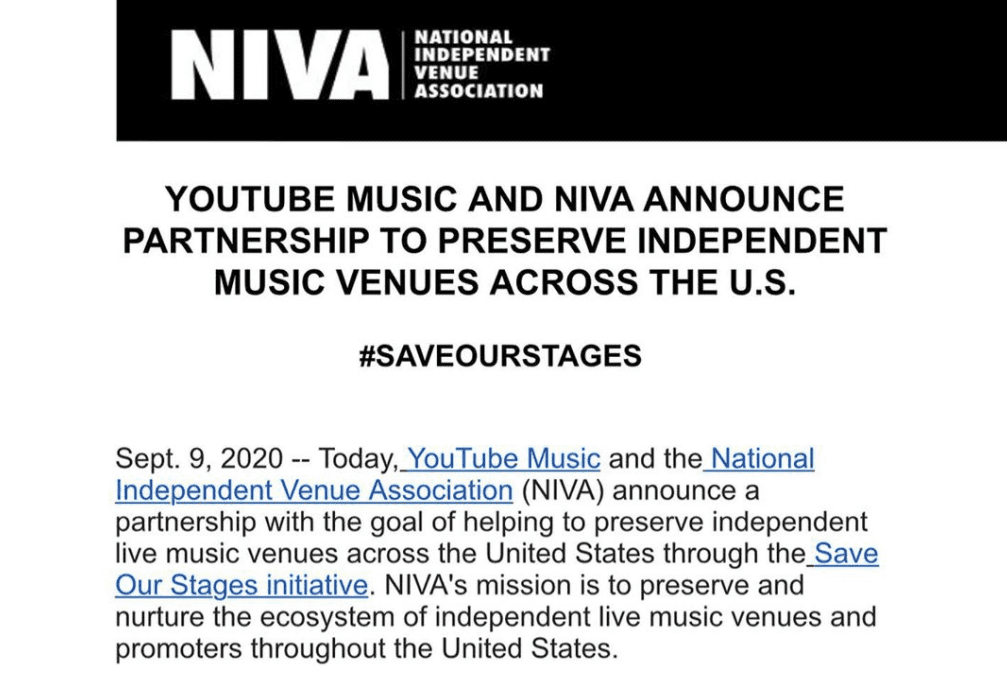 The federal aid that the National Independent Venue Association has been seeking via saveourstages.com has yet to come, but there might be some relief coming via YouTube Music. Announced yesterday, NIVA and YouTube Music will partner to facilitate live performances across the country as well as give a helping hand in raising funds directly for their Emergency Relief Fund.

Many of these music venues across the U.S. do have dedicated comedy nights like The Satellite LA, which had to close their doors to live performance only to reopen as a restaurant in the not so distant future due to the uncertainty of when they would be allowed to open for live shows again. The details of what this partnership between NIVA and YouTube Music have yet to be seen, but we imagine that it’ll involve some some virtual fundraising shows for NIVA and maybe some live-streaming support for what will have to be limited capacity shows in the not so distant future.

We’ll have to wait on what that will really look like, just like we have to see the rest of everything else in the world is going to be every single day.

Thanks @youtubemusic ! Today, YouTube Music and the National Independent Venue Association (NIVA) announce a partnership with the goal of helping to preserve independent live music venues across the United States through the Save Our Stages initiative. NIVA's mission is to preserve and nurture the ecosystem of independent live music venues and promoters throughout the United States. Together, YouTube and NIVA will work on unique programming that will help bring live performances back into music venues safely. In addition, YouTube will help raise awareness and funding for the NIVA Emergency Relief Fund. Please subscribe to our YouTube channel at http://youtube.com/c/niva