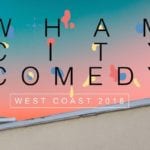 For any and all that are interested in the weirdo side of the comedy spectrum, you might not want to miss East Coast based comedy collective Wham City (Alan Resnick, Robby Rackleff, Ben O’Brien, and Cricket Arrison) on their LA stop of their West Coast tour. You’ve probably enjoyed some of their work on Adult Swim such as Unedited Footage of a Bear.

They’ll be coming to Dynasty Typewriter on Sunday, September 16th at 8PM. Tickets are $12 in advance and $18 at the door. Go get them here.

Ian Abramson’s “7 Minutes in Purgatory”, That Has Comedians Perform Separated from Audience, Is Now a Comedy Central Web Series

The Comedy Central web series version of Ian Abramson’s brilliant show 7 Minutes in Purgatory, where comics do a set while separated from a live audience and can’t hear their laughter while that audience can watch remotely, is finally here.

With Comedy Central footing the bill, Ian got a truck outside of the venue to sequester the performers away from the audience so there is absolutely no way that the comedians can hear the audience (on top of noise cancelling ear protection).

Watch what happens when you stick Nick Vatterott…

…and sketch group Wham City get stuck in the back of a truck and try to do comedy.