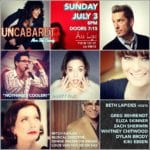 The rest of our listings for comedy shows/events as well as open mics are embedded at www.thecomedybureau.com.

Along with the great myriad of comedy releases that you should get in on this week, Dylan Brody’s Dylan Goes Electric: Live at the Throckmorton should be added to your list.

This latest album of Brody’s came out this past Tues. and has been our favorite of his the comedian and storyteller’s discography thus far. When Bob Dylan went electric (we’re assuming that’s what Brody is referencing with his album title; our apologies if he’s not) all those decades ago, there was a divide that came between his fans. This particular Dylan and this record definitely doesn’t have that problem as Brody’s ornate storytelling are injected, in this record, with a great playfulness.

Get Dylan Goes Electric: Live at the Throckmorton from Rooftop Comedy here.

Dylan Brody Went More Through Than Most To Get His Diploma

Humorist, storyteller, and purveyor of fine words Dylan Brody put this wonderful tale online of how getting a diploma for him was much more complicated than just completing your school’s general requirements or being asked to teach/mentor there several years later.