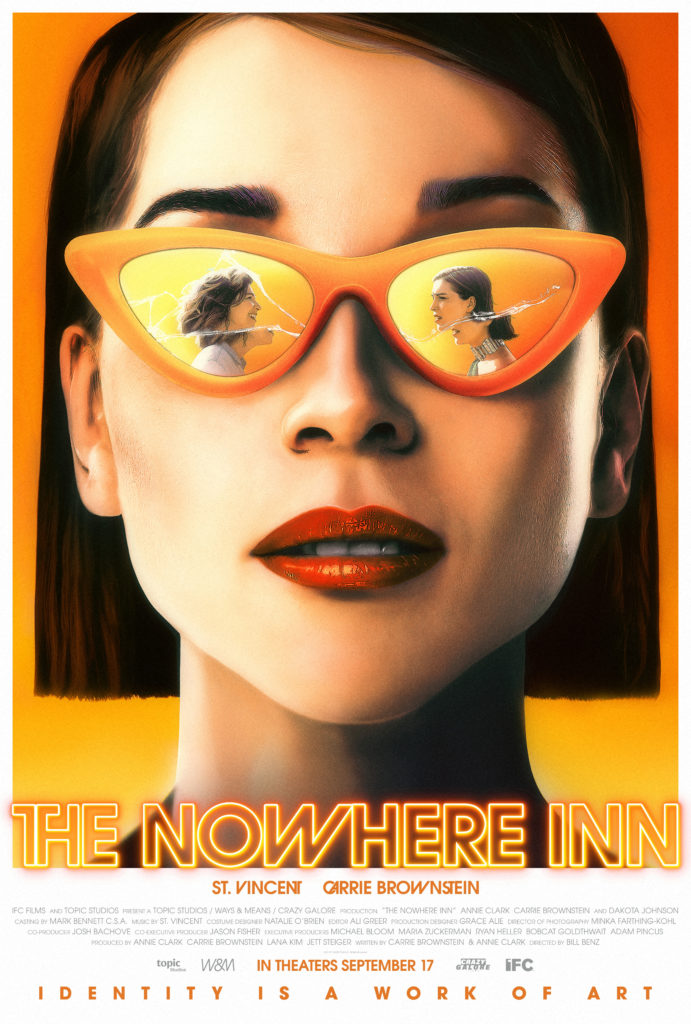 It must have been much of your experience over the last year and a half to take in a gargantuan amount of TV and movies; very likely more than you’ve ever watched in any other time in your life. With binge watching of content at an all time high, you’re likely to note the repetitive and homogenous nature of it all. There are slight tweaks hear and there, some new talent you’ve never seen before and some of your old stand-bys try something new.

Certainly, very little of it jolted us out of the dynamic of just watching something because it was on and new.

The extremely trippy, meta rock mockumentary, The Nowhere Inn, from writers Carrie Brownstein and Annie Clark AKA St. Vincent and director Bill Benz is a much needed, refreshing, starkly funny departure from so much of, well, everything else out there. It’s already a bold concept to have a fictional documentary/satire about making a documentary of art rock phenom St. Vincent on tour going off the rails of the here and now and into several layers of the subconscious and unconscious. It takes on the nature of fame/rock stardom in such a surreal fashion that really makes you reexamine why they are so desired (or that being the narrative we’ve been subjected to with hours and hours and box sets upon box sets of rock docs and live concert specials).

Throughout that particular journey, The Nowhere Inn jumps, breaks, stretches genre tropes, and expectations in bolder and bolder ways that one might wonder where the film is taking us and, just as important, where we were just a few moments ago. That may be some deep water to dive into, but trust that Brownstein’s presence here makes sure there’s enough Portlandia-esque subversion to keep a fascinating narrative thread going.

In fact, The Nowhere Inn seems to be on a mission to subvert the whole idea of performatively pondering the difference between art and artist and the fame cloaking it all, especially if you just simply love the art that they make for us all.

We couldn’t help but keep thinking of This Is Spinal Tap throughout watching Clark and Brownstein’s attempt at making a very curated, hip behind-the-scenes tour documentary go awry. Famously, Spinal Tap saw a hair metal band let their egos hysterically get the best of them in a faux documentary format and The Nowhere Inn carries that torch, but opts to go to the outer limits with it. There’s more than a few passages in the film that are very much are a lucid dream that’s starting to unravel (before you get thrust back into some sort of reality).

Both Clark and Brownstein take really take huge swings in being something unto itself and wholly and enthrallingly unique and absurdly funny in the process even as they’re literally and figuratively winking at their own fictional selves winking at the camera.

You can get a dab of what’s to come with The Nowhere Inn trailer here.