why is there no hope 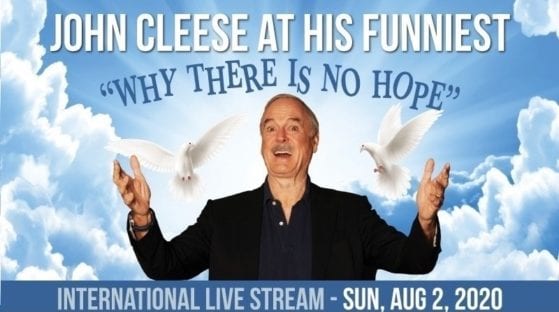 Comedy legend John Cleese (Monty Python, Fawlty Towers) had been slated to tour the world with his brand new hour show Why There Is No Hope this year. Unfortunately, like everything around the globe for the last several months and the next several upcoming months, this live tour got cancelled/postponed. He actually had a date slated for the LA area in fall, but the fate of live performance even several weeks from now is still very, very much up in the air.

With all of that in mind, Cleese will not be deterred from bringing his new hour (whose title seems even more prescient given that it was conceived of well before COVID-19 came to the public’s attention). He’ll be doing a live-stream performance of Why There Is No Hope this weekend, on Sun. Aug. 2nd at 12PM PT/3PM ET/8PM BST.

Tickets are $19.99 (considerably cheaper than what you would have been spending to see it live) and you really ought to go get your tickets right now right here.