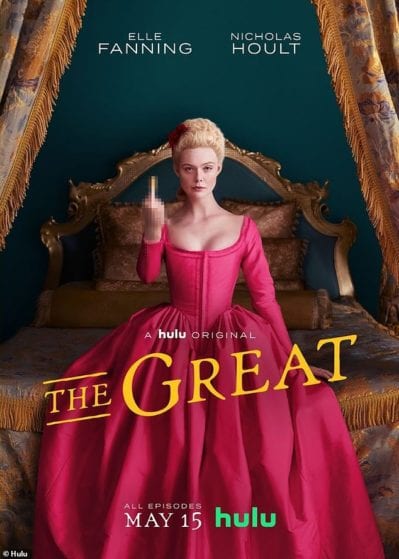 Hulu’s latest comedy series is probably one of the bolder moves that they’ve pulled this year. That’s saying something considering the unabashed pandemonium and gore-filled dark comedy of another brand new original series of theirs, Solar Opposites, from Rick and Morty co-creator, Justin Roiland.

The Great is a very liberal and highly satirical retelling of the rise of real life historical figure Catherine the Great and it comes to us from the mind of Tony McNamara, the co-writer of one of our personal favorite films from 2018, The Favourite (another adjective-only title, alt-history period piece). Very much like The Favourite, The Great follows a lower classed woman, seeking a higher purpose and power while surrounded by dangerous ineptitude. Actually, the gross incompetence and extravagant waste afforded by monarchy is possibly even more ramped up than it was in The Favourite. Peter III of Russia, played by Nicholas Hoult, is a pure, unfiltered walking id afforded with unchecked power and privilege, often thinking of life in the binary terms of either having or not having sex.

[Spoiler ahead] The liberties, with which McNamara very transparently takes to make The Great “occasionally” true, really play up the absurdity to a quite shocking comedic effect. A bear given as an initial gift to the titular character, Catherine, played by Elle Fanning, ends up being shot to death as a test subject for Peter’s new pistols.

Episodes for The Great run near an hour, which categorically tosses it up between comedy and drama, but those lines, very thankfully are getting very blurred (ex. the romantic drama that’s on the tip of many people’s tongues right now, Normal People, only has half hour episodes). The Great is clearly a great, savage satire and we get to enjoy an hour of it at a time (or more as you’re probably going to binge watch it).

All episodes of The Great are streaming now on Hulu.