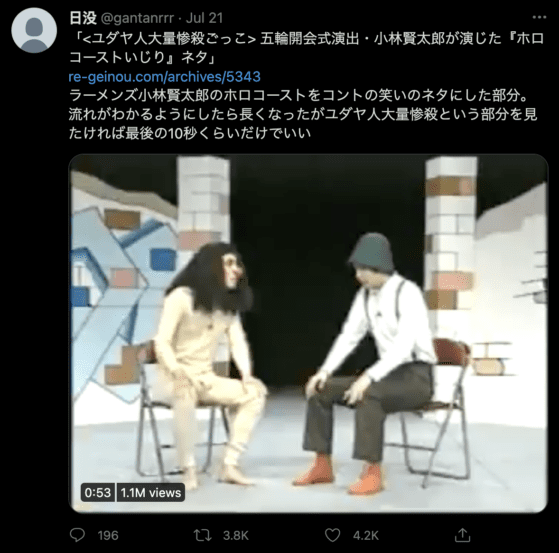 Though the conversation of cancel culture, especially in regards to comedy has been more than well worn in America (and perhaps, not even that effective?), its reach goes far beyond North America. Just announced today, Tokyo Olympics Opening Ceremonies director Kentaro Kobayashi was sacked from one video of a bit he did over twenty years ago as part of a comedy duo called The Rahmens where he made a Holocaust joke.

Not only is the phrase “Let’s play Holocaust” that is being quoted by the Tokyo Olympics Organizing Committee as the phrase that’s so offensive that it’s worth firing their director a score of years later out of context, but the bit itself is so old and Kobayashi, it would seem, has stepped back from the comedy stage to direct (not to mention that people have spoken highly of his character since).

The whole situation feels incredibly obtuse, especially since the Tokyo Olympics continues to face a dire situation due to COVID-19. They already delayed from 2020 when the Olympics had been set to take place, but with the proliferation of the Delta variant across the globe and surges of COVID-19 popping up around the globe, which very much includes Japan, the Tokyo Olympics has already scaled back its scope with having no spectators and stepping up their COVID-19 protocols in the Olympic Village.

In short, this Olympic Games is already a mess and it’s about get messier. It would almost seem that Organizing Committee is piling on here with Kobayashi to make it seem it won’t entirely be the fault of them pushing forward with the Games (as they stand to lose billions of dollars if they outright cancel the Games). Of course, the reality of the COVID-19 pandemic persisting due to lack of vaccine access, vaccine hesitancy, premature lifting of pandemic protocols, and the numerous variants is only bringing more and more chaos as Tokyo going on with their Olympics.

There’s no telling what’s going to happen with the Olympics (we sincerely hope that everyone involved is safe and doesn’t get or further the transmission of the virus) or with Kentaro (and how cancelled he is) at this point. Maybe Kentaro will dip back into comedy to clear his name? More importantly though, we’ll see if this Olympics even gets through the majority of its schedule (one country and big corporate sponsors have already bowed out).