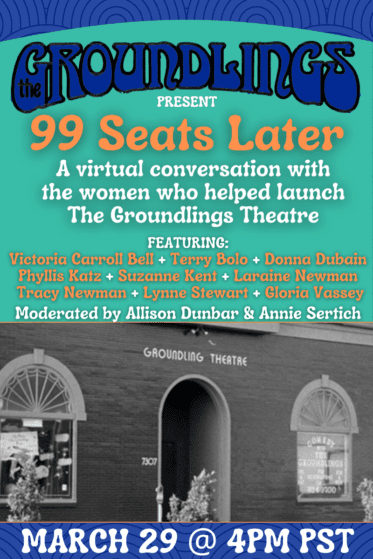 Pick of the Day: 99 Seats Later: A virtual conversation with the women who helped found The Groundlings Theatre 3/29

One of Los Angeles’ most storied and longest running comedy venues is none other than The Groundlings. Part of the reason that they’ve been around for so long comes from their gathering of pioneers of sketch and improv under its roof decades ago and keeping its demanding program/main company alive and well throughout all these years. From there, it hasn’t been surprising to see Groundlings alum make up a great deal of the SNL cast.

So, as part of Women’s History Month, it would be great to hear the stories from the female trailblazers that helped the ascent of The Groundlings Theatre to its historic and revered status that it has today. On Mon. Mar. 29th, Current Groundlings Main Company members’ Allison Dunbar and Annie Sertich will moderate an exclusive discussion with such women including Laraine Newman, Terry Bolo, Victoria Carroll Bell, Phyllis Katz, Suzanne Kent, Tracy Newman, and Lynne Marie Stewart.

The live-stream panel discussion will be called 99 Seats Later and is set to stream at 4PM PT on Mon. 3/29. Tickets are $10 and you can (and very much should) get them here.