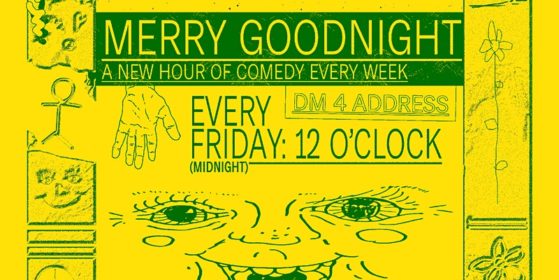 Pick of the Day: Merry Goodnight [Fridays] (in LA)

While stand-up comedy is very much back in Los Angeles, other forms of comedy have quite yet returned with such fervor to the LA comedy scene. Improv and sketch and other delightful comedy oddities are scarce compared to the plethora of shows that happened pre-lockdown.

Also, live comedy at the midnight hour wasn’t the biggest thing in LA, but there were always a few things you could count on. That too is very, very hard to find these days.

Fortunately, there has been a magical late night oasis of coloring-outside-the-lines comedy every Friday night at an adorably tiny backyard in Highland Park. Merry Goodnight is the sort of loosey goosey fever dream of a live comedy show that you’d be looking for at midnight on Fridays (especially because they absolutely don’t allow stand-up on their show). The unfiltered silliness of Grace Freud, Steven Kreager, Andrew Friedman, and Kate McCarthy pervade the midnight hour along with special guests from in and around LA to do that sort of wild comedy you’d only see past 11PM at UCB or on The Tomorrow Show or at Lyric Hyperion in general.

It’s free to attend, so long as you have your proof of vaccination and, with all of that in mind, you better get yourself to 6166 York Blvd. on this Friday night and every Friday night going forward. Get more info/details here.