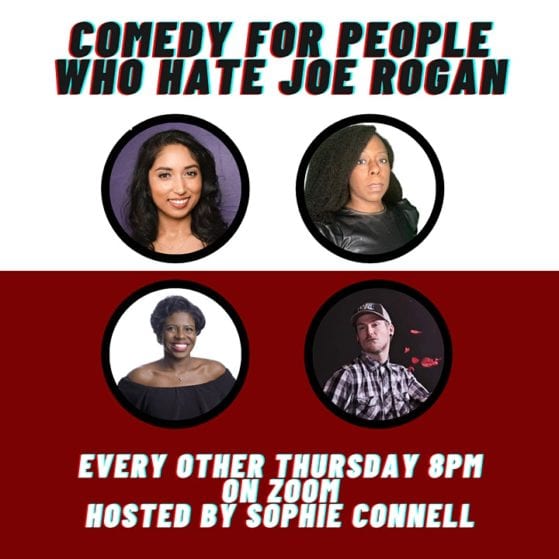 Pick of the Day: Comedy For People Who Hate Joe Rogan 5/6

So, Baltimore-based comedian Sophie Connell has had this recurring virtual stand-up showcase where she features, “four comedians from differing backgrounds.” There are plenty of virtual stand-ups that do feature diverse talent, but we this one just happens to have the timely name of Comedy for People Who Hate Joe Rogan.

Given his, at best, wishy-washy stance on the COVID-19 vaccine that caused national controversy as he expressed said stance on his podcast The Joe Rogan Experience, one of the biggest podcasts around, comedy or otherwise (Spotify paid him $100 million to go exclusive with their streaming service).

So, this live-stream pushes for other voices that you might want to hear (including very funny guests Erica Switzer, Subhah Agarwal, and Baltimore-based comedians Michael Furr and Robin Hazel).

This latest edition of Comedy For People Who Hate Joe Rogan is set to go live on Thurs. May 6th at 5PM PT/8PM ET and is free to stream, if you RSVP here.