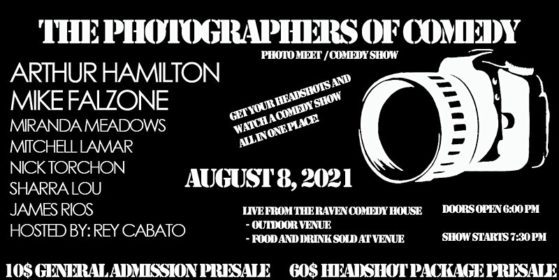 Pick of the Day: Photographers of Comedy (in LA) 8/8

While many comedy shows offer more than just the comedy, it’s not often that you’d be able to get headshots/some very nice photos of yourself in addition to a live comedy show. In fact, we’d say that it almost never has happened in our decade plus tenure at The Comedy Bureau.

Lucky for you, such a two-for-one event is happening this Sunday, Aug. 8th at 8PM PT at the Raven Comedy House in Sylmar where you could just enjoy an intimate, house comedy show, but you could also get a brand new set of professionally slick photos for anything from making sure you head a decent promo photo to auditions to making it seem to your parents that you have a lot of things going for you out there.

Called Photographers of Comedy, the evening will feature the comedy and/or photos of:

Tickets for the show are $10 and you can get, for presale, a $60 headshot package. Find out more details and buy your tickets here.