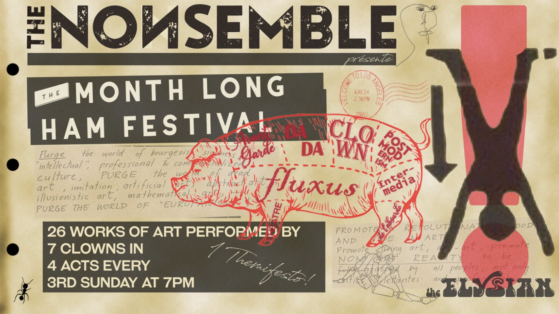 Pick of the Day: The Nonsemble Presents: The Month Long Ham Festival (in LA) Starting 2/20

As we stand at the precipice of the middle of January with very little to show for it, February seems to be the month to look forward to when things won’t be canceled or postponed all the time.

So, one should look forward to the ever changing performance art clowning showcase that will be The Month Long Ham Festival coming to The Elysian on the 3rd Sundays of the month. According to the Nonsemble, a collective of comedy folks from the clowning-side of things, they’re going to attempt “26 original works of performance art” in just an hour. We’re sure that’s going to be the sort of the grand and hilarious chaos that we’ll need when it’s safer to go to things.

Get your tickets to the first installment of The Month Long Ham Festival on Sun. Feb. 20th at 7PM PT at The Elysian at $12 a pop here.