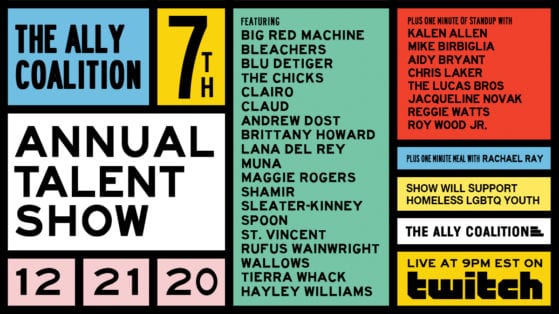 It’s almost as if there is an advent calendar for holiday charity live-streams that feature some of the biggest and brightest and best in comedy and music every day this week (and maybe next). There have been plenty of Georgia Runoff benefits, but they’re also big time festival-gala-ish line-ups that are supporting issues that are a little broader.

In the case of the Ally Coalition’s 7th Annual Talent Show, it’s supporting unhoused LGBTQ youth, some of the most vulnerable members of our population. For their very special evening, they’ve got the likes of Mike Birbiglia, Aidy Bryant, Reggie Watts, Jacqueline Novak, Chris Laker, Roy Wood Jr., The Lucas Brothers, and Kalen Allen on the bill. That’s in addition to musical performances from the likes of St. Vincent, Sleater-Kinney, Brittany Howard, Bleachers, Hayley Williams, and more.

It will all be streaming this Sun. Dec. 21st at 6PM PT from Jack Antonoff’s Twitch.