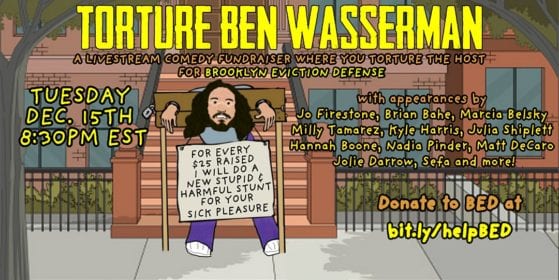 Defending against evictions right now during this historic pandemic is so crucial that comedian Ben Wasserman is seemingly up for anything to raise money for Brooklyn Eviction Defense. In fact, he’s so down for the cause that he’s putting on a show called Torture Ben Wasserman wherein very special guests (including NYC favorites Jo Firestone, Marcia Belsky, Julia Shiplett, Milly Tamarez, Kyle Harris, and Brian Bahe) will subject him to challenges that seem to be at their whim while he’s doing the simple, yet infamous “cinnamon challenge”.

The exhibition of Ben’s suffering for comedy’s sake will hopefully prevent potential suffering of those at risk of eviction at this time.