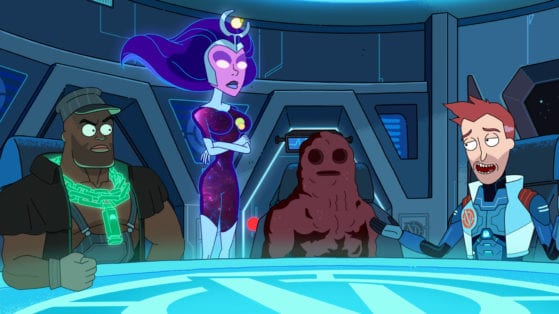 In a sweeping move, Adult Swim, which is still operating on late night hours on Cartoon Network, and then massively online and throughout streaming services afterwards, their latest round of series orders are spin-offs. For the majority of their programming, Adult Swim has been fiercely dedicated to original programming that would very likely not have a home anywhere else (at least until the ascent of Netflix and, as of late, FX’s foray into animation).

So, announced this week, Adult Swim has bestowed series orders on The Vindicators (Rick & Morty’s satirical version of The Avengers), Alabama Jackson (a spin-off from the Robot Chicken Universe), Aquadonk Side Pieces (the lives of the lesser and other characters of Aqua Teen Hunger Force) and an animated version of Your Pretty Face Is Going to Hell.

It should stand as a testament to how truly prolific Adult Swim is with a slate full of new darkly comedic (or, in some cases, horrific) animated series in addition to these four spin-offs (we’re personally excited to see how far The Vindicators is going to skewer the MCU, DCEU, and whatever else universe sourced from popular IP of any kind).

We’re sure that the continued troubles of in-person, live action production during the pandemic (which, again, isn’t over) has further encouraged a focus on animation rather than shooting shows and movies with real people and that helps in this case too.