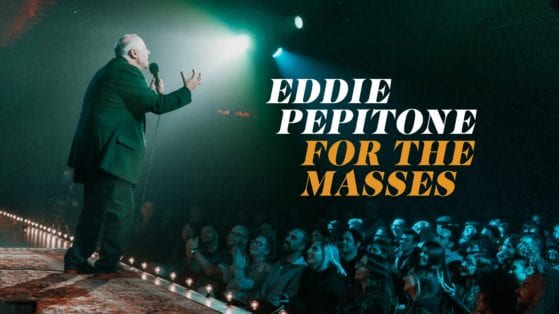 Though it was shot over a year ago and the world is such a wildly different place than it was in February 2019, the words, rants, bits, and asides of Eddie Pepitone in his latest hour special For The Masses is more relevant than ever.

For The Masses is the perfect title for Pepitone’s latest (on top of being his best hour yet). Eddie’s stand-up is simultaneously for the disenfranchised/a challenge to the power structures that surround us all as well as an exquisite deconstruction of the comedic form (as Eddie is famous for going on tangents, commenting on tangents, and bringing it all back somehow). That has been Pepitone’s brand for decades at this point, but there is a special spirit that is caught in this Pepitone special, directed by frequent collaborator Steven Feinartz. There is an electricity throughout the crowd (full disclosure, we were there) and Eddie was as sharp as we’ve ever seen him. There is always an air of dark comedic prophecy that comes with Eddie’s stand-up that gets joyfully contrasted with abject silliness and absurdity. Whether it’s about late capitalism, dictators, or how Eddie specifically envisions how forgetful he would get as his brain deteriorates with age, Pepitone is one of the best when it comes to reckoning with genuine dark comedy that’s so unbelievably funny.

Eddie Pepitone: For The Masses just released today. You can get it here. Go get and enjoy the special that is pretty in line with the zeitgeist though it was taped several months ago.

Here’s a bit of a teaser by the way.

My new special FOR THE MASSES is now on Amazon Prime, iTunes, Google Play and more! Go watch it before I die!!! Album out too! Directed by @stevenfeinartz Get it here: https://t.co/mBACExgUaK pic.twitter.com/FMnwH8HCRu