Sacha Baron Cohen Tweets Pic of Trump and Mark Zuckerberg, Says “One Down. One to Go” 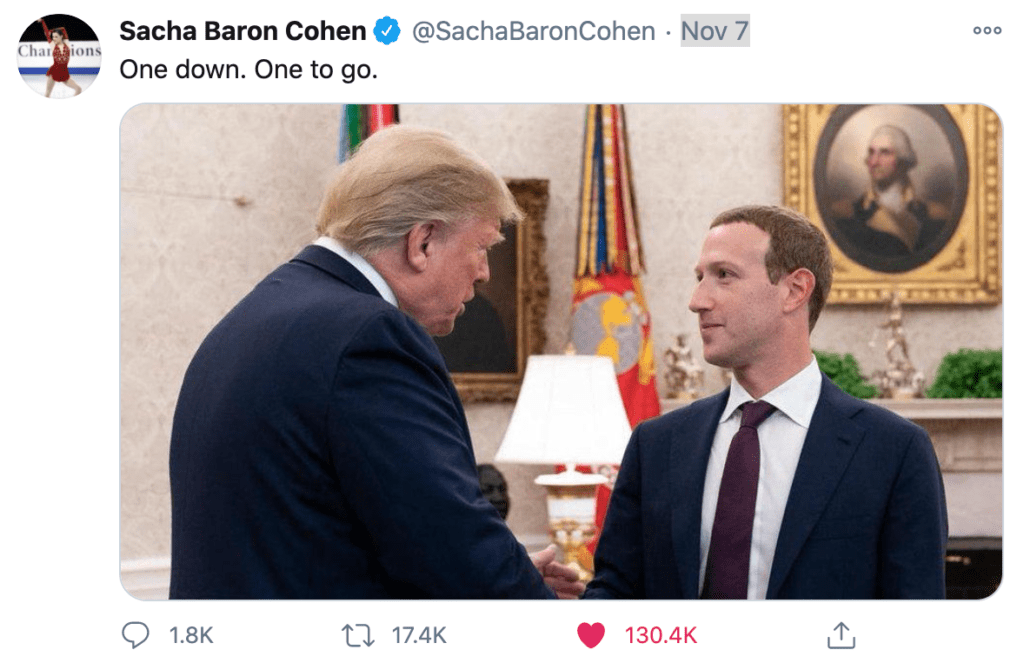 With the release of Borat: Subsequent Moviefilm in the thick of this year’s General Election, Sacha Baron Cohen stirred up the sort of controversy that he has made an entire career out of and specifically targeted the Trump administration. Specifically, Cohen dressed up in a Trump costume while in character in Borat to interrupt a Mike Pence appearance in order to present his fictional daughter, Tutar, to Pence as a gift. Even more notably, Cohen duped current Trump legal counsel Rudy Giuliani into a similar situation.

Now that Trump has lost to Biden over the past weekend, Cohen has indeed tweeted, “One down. One to go.” with a picture of Trump shaking hands with Facebook founder Mark Zuckerberg.

Supposedly, one facet of comedy is indeed speaking truth to power and, within that, ridiculing those whole abusively wield power. No matter how hard hitting a joke (or even just a line in a joke) might be, it’s hard to truly see what the effect might be. There are plenty of very, very shrewd political jokes that, ultimately, only preached to the choir and an aside during a set by Hannibal Buress led to an accelerated downfall of Bill Cosby. Then again, the words of George Carlin still ring very loud and very true as a wake-up call, even in 2020.

It’s curious to ponder if Cohen showing the ridiculous incompetence, ignorance, and prejudice of Trump cronies (and, by proxy, Trump himself) has affected anything. Four years of Donald Trump as POTUS has given more than enough proof of this. Really, his first 100 days should have been enough proof to show how bad his Administration was and would ultimately end up being. It’ll be great to see Cohen dupe Zuckerberg especially since he has him, as of this tweet, in his crosshairs, but how that will bring about the downfall of Zuckerberg/Facebook is a mystery at this point.

There is no doubting that Cohen is mastered in the art of satirical comedic performance and that showing ridiculous bigots to be ridiculous bigots can be very satisfying. We want to hope that whatever he has planned will actually dismantle the social media giant and other like them. If Cohen actually pulls that off, that definitely would cement his legacy in the art form of comedy and The Kennedy Center should automatically give Sacha the Mark Twain Prize for Humor.

One down. One to go. pic.twitter.com/eQYi1pBqku