Nore Davis’ Live From The Comedy Trap House, One of the First Comedy Albums Made Over Zoom, Out Today 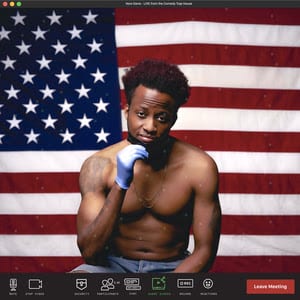 Nore Davis has consistently been upbeat, joyful, and hopeful in his stand-up in every one of his hours that he’s released over the years. In the face of the COVID-19 pandemic, Davis, like many other comedians has done his best to keep his craft sharp, express himself, and get laughs over Zoom, the video conferencing platform that a good majority of comedians had no idea about until the latter part of March.

Davis opted to headline on his own from from the get go at “The Comedy Trap House” for a few weeks with a live Zoom audience, so there would be laughs to had (in contrast to the plethora of live-stream shows with comedians performing to silence while a virtual audience enjoys it on the other end). From that, Nore opted to put out a brand new album via Zoom.

Thus, Live From The Comedy Trap House was born with Nore speaking from the heart with his signature warmth about COVID-19, the murder of George Floyd/Black Lives Matter, and even a break-up he went through while in lockdown. In fact, this was only recorded days after George Floyd’s life was stolen, which gives you Nore’s perspective at its freshest and most raw. You very rarely get that in a comedy record, but then again, this is a special album.

The hour is somewhat surreal as you can almost sense that the laughter from the audience and Nore are disembodied voices, but they still managed to be connected and laugh and giggle throughout the whole album. Davis’ hope and joy are still clearly intact, which is amazing considering how deeply traumatic every single day has been over the last several months. Live From The Comedy Trap House is and will be a fascinating document of this historical moment both because of how it was created entirely over Zoom and will likely be the most “virtual sounding” comedy album and for it speaking to everything that’s happening in the world that other future generations might be in disbelief about whenever we talk about it.

So, go listen and enjoy and take in Live From The Comedy Trap House, a comedy album that is very well historic on its own. Fresh from Blonde Medicine, it’s streaming at all the places you get your comedy albums.