Nick Skardarasy Pulls Off Doing a Charming Live Stand-Up Special, “Thin Walls” by Taping It With His Neighbors in His Apartment Building 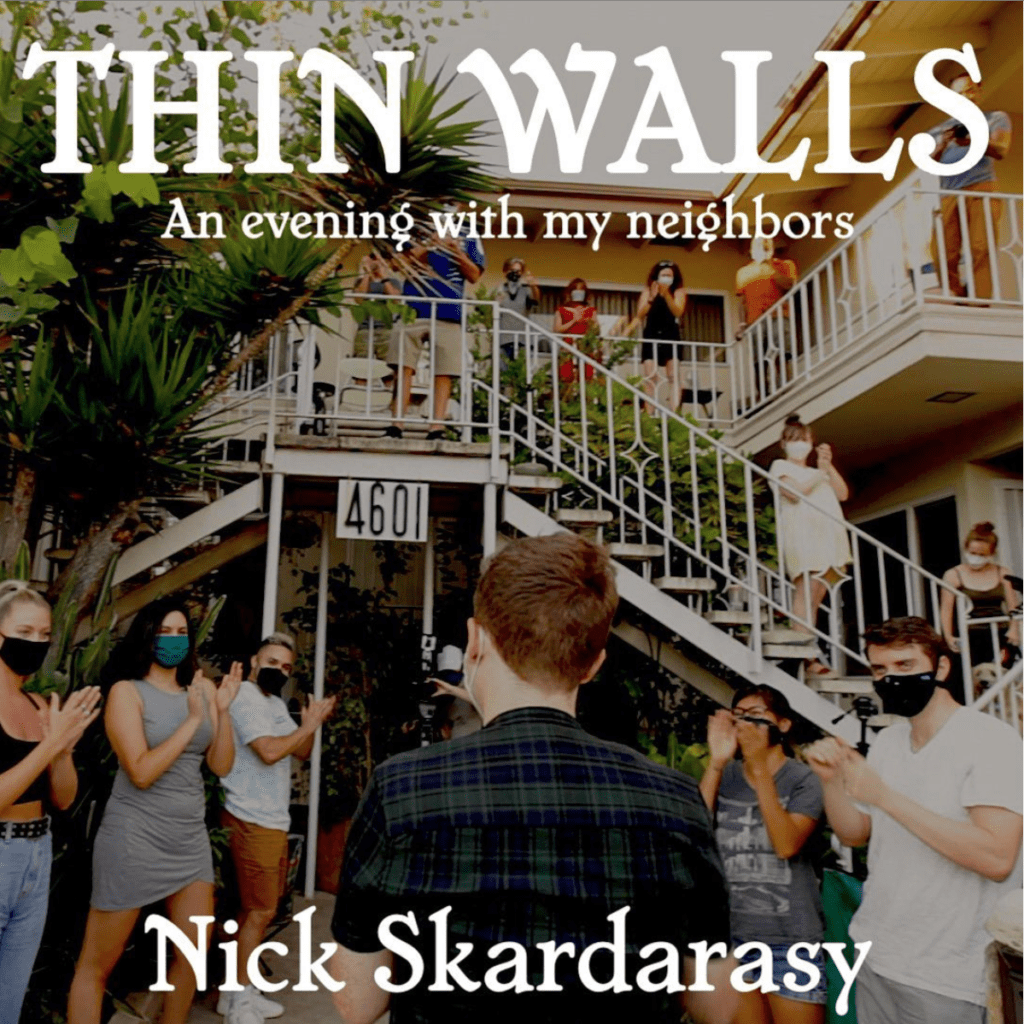 Taking a cue from the NBA’s bubble, a clever Nick Skardarasy made his very first comedy special by making the crowd and venue his apartment building. As such, he performed stand-up for a real crowd, gave all of his neighbors in his building a free live show to watch both in person and from the comfort of their own home, and, on top of all of that, got to tape his very first half hour stand-up comedy special, Thin Walls: An evening with my neighbors.

Skardarasy had been climbing up the ranks in LA comedy before lockdown took place. With such uncertainty of when normal stand-up comedy can be done in its traditional manner (packed in a dark room with low ceilings), all of comedy, not just stand-up, has tried so many different things. There is the plethora of live-stream comedy online, but there has also been plenty of drive-ins, doing stand-up on the other side of a glass window, shows in parks, etc. done all over the country. Seeing the layout of his building and growing very close with his neighbors, Nick got the idea that he could attempt performing in front of a very specific live crowd (you’ll notice that his neighbors are still socially distanced and masked) and maybe, just maybe, get his very first special out of it.

He had already been working on putting an extended set together of his acute observations, smartly written into jokes and bits and call backs, juxtaposed with glimpses into his personal life and history. While in quarantine, Nick worked on it as much as he could by structuring it, acknowledging the world before and after the pandemic hit, and rehearsing it with the grace of his girlfriend between the walls of his apartment (hence the title). Taking the stage for the special, Nick appeared as if he indeed been working the set out at clubs and bars and got it pretty damn tight.

There is also a genuine layer of sweetness (in addition to Nick’s very sweet demeanor in general) that’s dabbed throughout the special with director Jon Zucker cutting in talking head interviews with Nick’s neighbors speaking earnestly about their quarantine and how they’ve been getting through it. It’s the sort of thing that you might have seen in HBO’s last several conceptual comedy specials.

The result ends up being an effervescent vision of that normalcy we all crave right now via a well-crafted half hour of classic stand-up that’s also very aware of the precarious times that it’s being performed in. Essentially, this special almost makes you forget that it was happening during a time of a global pandemic and uprising.

Nick Skardarasy’s Thin Walls: An evening with my neighbors is streaming right now, for free, on YouTube, for your absolute convenience here.