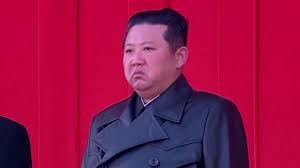 When it comes to honoring the dead, more often than not people naturally find themselves in a state of reflection, which is why the anniversary of someone’s death or a national tragedy is a “day of observance” rather than a holiday. Certainly, one doesn’t need to set up some government mandate that commands people be sad “in honor” of a noted figure’s passing from this mortal coil.

Well, whiny child dictator/Supreme Leader of North Korea Kim Jong-un has decided that he actually does need to enforce people’s sadness in honor of his father, Kim Jong-il, the Supreme Leader of North Korea before him, and his death 10 years ago to the day. Jong-un has just issued an official ban of laughter in addition to alcohol and any sort of general sign of happiness for a period of 11 days as a proper time of mourning.

It’s the latest missive from the petulant despot that is intended for his subjects to take him with the utmost seriousness, but is so overly absurd that one can only laugh at him for the idea of banning laughter. It’s not too dissimilar from Jong-un’s neighbor, Xi Jingping, outlawing depictions of him as Winnie the Pooh, which inevitably invites only more ridicule and roasting. Even when Kim Jong-il died, the way that people cried was so performative that it seemingly almost borders on laughing.

In the context of comedy, it’s so beautifully ironic that such a ban can’t be feasibly enforced across the board and, for whatever it’s worth, there has to be a contingency of North Koreans that are laughing in private or, at least, to themselves about how surreally obtuse this all is (when they’ve gotten a spare moment from fearing for their lives). There’s an undeniable performance quality to

Someday, someone from this regime will end up doing some type of comedy, specifically about their time in North Korea and we’re sure it’ll be illuminating as much as it’ll be hilarious.