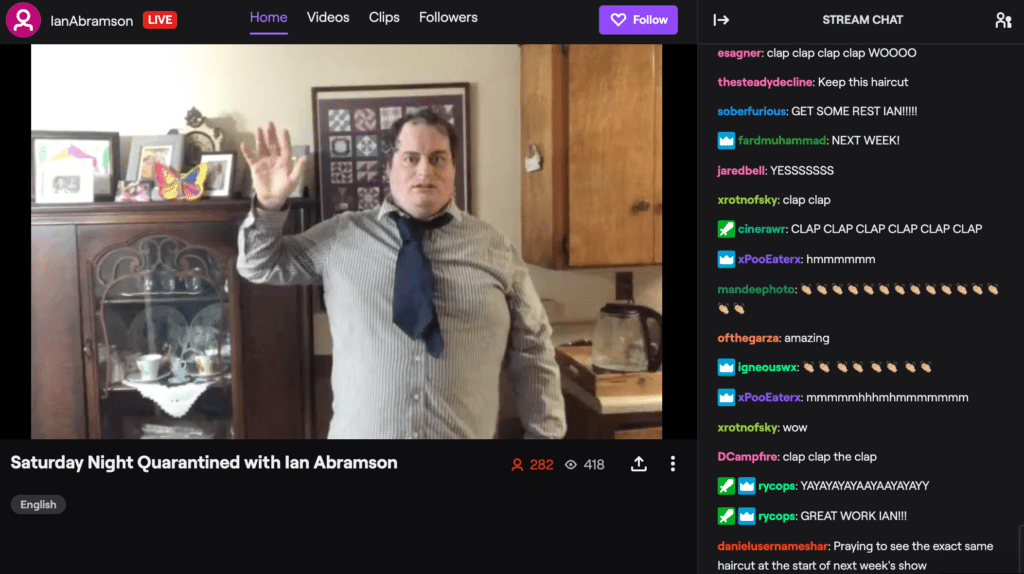 In these times of being sheltered at home, comedians of all kinds have very, very, VERY quickly pivoted to the technology that had been, perhaps, waiting for them, livestreaming. Livestreaming comedy of all kinds has pervaded the platforms of Instagram, Twitch, YouTube, Facebook Live, and even the mainly-meant-for-business-meetings video-conferencing platform, Zoom over the last week.

With this new wave of digital/virtual comedy, it would seem that comedy has been dropkicked into the not so distant future and thus, lots of very funny people are figuring out how to adjust to not having a live audience, doing things remotely, switching between feeds, etc. etc.

Always one for a high concept, high risk bit, Ian Abramson took it upon himself to do an entire episode of Saturday Night Live solo (well, with the help of pre-taped sketches from Sarah Squirm, Nick Ciarelli & Brad Evans, Tommy McNamara, and more and even a Weekend Update with Tim Barnes playing both Colin Jost and Michael Che) last Saturday. Even without dealing with the self-isolation forced by a global pandemic, that’s a mighty tall order, but undeniably intriguing. Add the anxiety of said global pandemic and there’s something even more special about Abramson’s daring attempt a feat that already seemed impossible and just got made harder.

Abramson went live on Twitch pretty much on time at 8:30PM PST and truly did an episode of Saturday Night Live with opening credits and pre-taped sketches in between, scurrying between performing, changing costumes, and flipping the feeds between live camera and pre-loaded segments. Yes, there were technically difficulties, but that only perfectly accents the times we’re living in and adds to the charm of what Abramson was doing here. The DIY-ness of it all, the meta look of what it takes to do an entire TV broadcast by oneself (you really did get to see Ian’s desktop throughout the broadcast), the entire chaotic nature of moments like having Ian having half his face painted like Anderson Cooper and the other half painted like Trump in order to do a version of SNL’s cold open is astounding and spellbinding and, more importantly, so damn funny.

We’d like to think that Ian’s gumption for this might recall the early days of SNL when things were uncertain, performers were diving in without much experience of what exactly they were getting into, and everything was done with abandon. Saturday Night Quarantine with Ian Abramson is just one of the things that we’ll have to look at closely when going forward with live sketch comedy after these strange times are past us.

Saturday Night Quarantine with Ian Abramson is going to go live once again at 8:30PM PST this Saturday at Ian’s Twitch here.