Hot Tub with Kurt & Kristen Is Back On! (via Livestream) 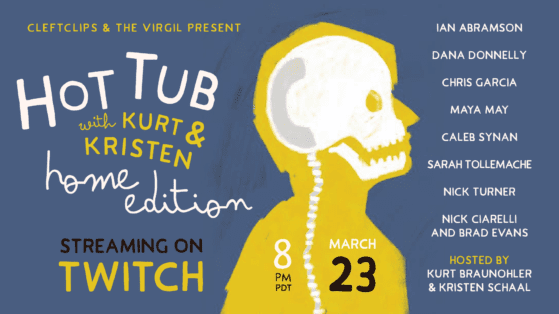 One of the pillars of LA comedy is the amazing, weekly Monday (mostly) stand-up show, Hot Tub with Kurt & Kristen. Of course, the COVID-19 pandemic has led to plenty of suspensions of live comedy shows across the board right now leading to a big wave of livestreaming, especially in the last week.

Thus, Hot Tub is joining in, starting tonight, on said wave, thankfully, at its same time, 8PM on Mondays with yet another fantastic line-up. In fact, it might be the first time that Hot Tub has ever done this and this might be the first live comedy show in LA to return via livestreaming.

This first livestreamed Hot Tub has a line-up of:

You’ll just have to watch it on Twitch at 8PM PDT/11PM EST. Tune in via Twitch here: http://bit.ly/hottubstream. Also, they’ll be taking donations during the show via Twitch, but you can donate to the comedians performing before the show here.