Since Grant Lyon’s Album Release Parties for “Scheduled Fun Time” Got Cancelled, He Made a Digital One 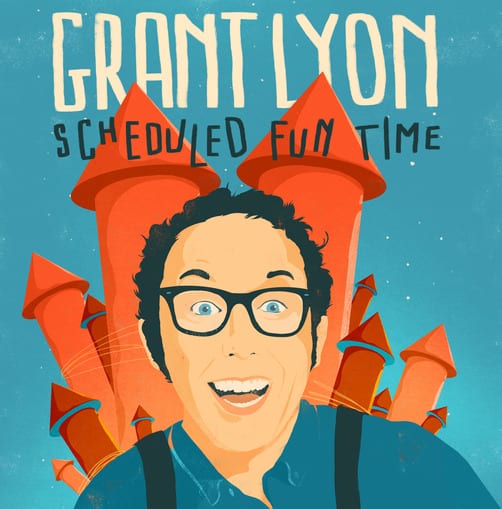 As everything involving people gathering got shut down a few weeks ago, performers of all kinds, set to put on shows on all throughout March and April, had to reconfigure everything and drastically dive into rescheduling, postponing, etc. When it comes to the prospect of releasing your new comedy album with accompanying live release shows, one might have to get pretty clever with how to go forward in these times.

Thus, Grant Lyon, who did indeed release a brand new stand-up comedy album Scheduled Fun Time this week, was unable to do the multiple album release shows that he intended to do right around now. Instead, he made a digital release party complete with a vast line-up of guests and some truly great stories about Grant, all stitched together from videos shot remotely and clips of their stand-up from the before times.

On Lyon’s release show are the likes of Cameron Esposito, Jake Weisman, Brent Weinbach, Dave Ross, Zach Sherwin, Shane Mauss, Ryan O’Flanagan, Dave Waite, Mitch Burrow, and so many more. We don’t all get to be a single venue to hear all of this together, but this still is quite the release show given the circumstances.

Also, go get the aforementioned album Scheduled Fun Time by Grant Lyon that was the impetus for this digital release party. Lyon shows off his meticulous crafting of observational humor as well as having one of the best stories about being a comedian winning in court of all time. Get/listen to Scheduled Fun Time here.