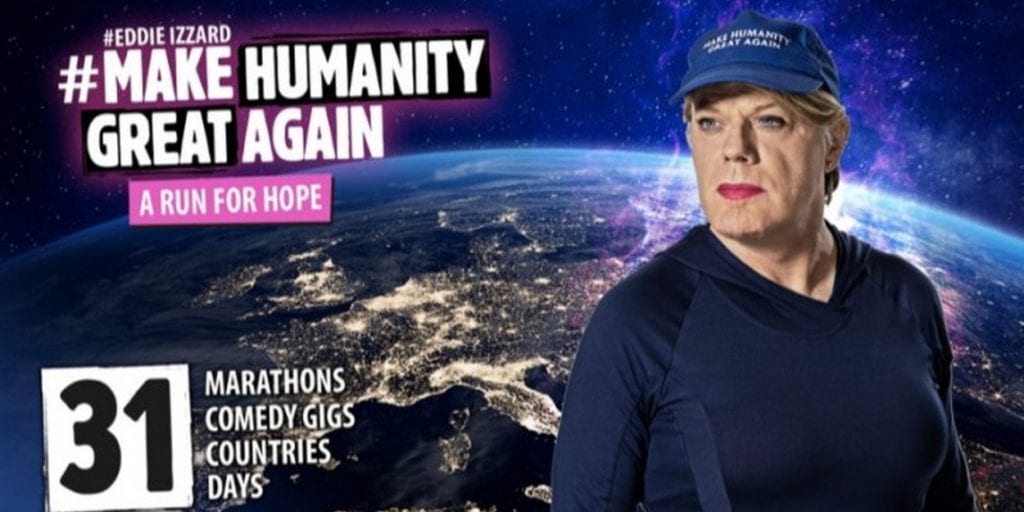 Eddie Izzard might be one of the most accomplished comedians in the world (and that’s not only from her accomplishments in comedy). Izzard, for years, has ran marathons, for public office, and even partially ran an English Premier League team in addition to touring the globe over and headlining comedy gigs in several different languages.

Now, Izzard is already underway on her most ambitious undertaking for the good of the world with her Make Humanity Great Again-A Run for Hope. Over 31 days, Izzard will attempt to run 31 consecutive marathons and doing 31 comedy gigs all for charity the whole way through. Some of those charities orgs include Fareshare, Walking With the Wounded, Care International, United to Combat Neglected Tropical Diseases, and Covenant House New York City. As of this post, Izzard has already ran 11 marathons, live-streaming her entire journey while on a treadmill and even interviewing guests during her daily marathon run.

See the proof for yourself on Eddie’s YouTube channel.

As it would seem that there isn’t anything Eddie can’t do, she very well may make humanity great again. You can support the aforementioned charities for Make Humanity Great Again here and follow Eddie’s live marathons/chats here.

Stand Up from the Couch (Live-stream)