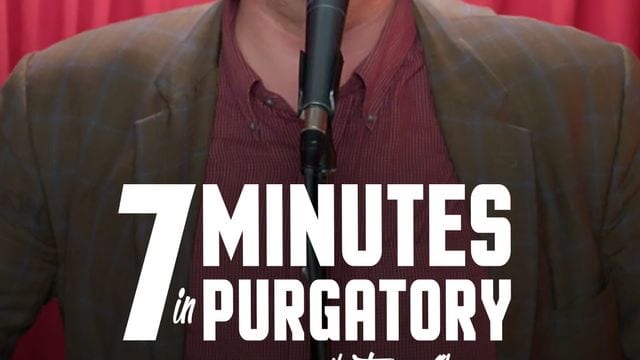 When it comes to comedians performing without a traditional audience like is the temporary norm for now, you might have heard references to comedy specials recorded years ago from Drew Michael or Harland Williams (Michael recorded it on a sound stage for HBO and Williams stood on a rock in the desert and did his hour).

We’d actually like to point you to something that is an even more apt comparison and a pretty spot on precursor to what how live comedy is performed and consumed right now. The ever innovative Ian Abramson put himself on the map a bit with ultra-innovative (at the time) live comedy show called 7 Minutes in Purgatory where comedians had to perform remotely, though near an actual venue without any chance to hear the laughs of the live audience that was in attendance for the show.

For the crowd, they were treated to watching a live feed of the comedian in the remote performance space and got to watch them try and perform. If you’ve seen a stand-up comedy show on Twitch, Instagram Live, Zoom, etc., you ought to know that 7 Minutes in Purgatory gave us a preview (even though it was unaware of doing so) of what was to come.

It was and is a great show and a daring comedic experiment that had comics recalibrate their act, try a daring bit that leans into the format, or automatically go into uber self-deprecation (exactly like they do now).

As an artifact of the before times, it’s even more fascinating to see what doing comedy in the way we have to do right now was like when we didn’t have to do that.