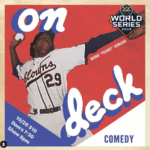 This Conan Sketch Questions the Validity of the World Series

While many television networks are looking for their next big sketch comedy hit series, we want to let everyone know once again that Conan and Team Coco are still making some of the best sketches around.

Case in point: this World Series sketch that begs the question, “Does the Boliviguay government disavow the World Baseball Classic due to their stance on sandwiches?”

If competitive eating can be a thing, then why can’t other activities that twentysomethings love to do drunk be a professional sport with a championship?

NYC based sketch group Temple Horses (Ryan E. Hoffman and Nick Ruggia) present if that query was answered with a World Series of Corn Hole featuring the very funny Andy Sandford calling “the game”/trying to maintain his sobriety.