Already, Our Airbnb Comedy Bureau Ride Along Has Gotten Guests from Around the World

May 5, 2017
Uncategorized
airbnb, comedy bureau ridealong, improv, live comedy, los angeles, sketch, stand up, tour, what to do, what to see

Since launching our experience on Airbnb, the “Comedy Bureau Ride Along”, we’ve had guests from here in the U.S. as well as the U.K. and the Middle East.

Their thoughts on the experience:

“Jake was an amazing host, it was great hanging out with a local comedian and having a glimpse at the standup comedy community in LA. I would definitely book this experience again!”

“Expert guidance from a local celebrity. Jake will be able to answer any question you throw at him, and pretty much guarantees you a good time. Highly recommended.”

Both gave five out of five stars.

Honestly, it’s been quite the privilege to share the LA comedy scene with folks from around the globe that might have not gotten to see it otherwise.

Oh, by the way, we’ve got dates available if you want to book an evening with us.

Via Airbnb, You Can Ride Along with The Comedy Bureau for an Evening

Airbnb has officially launched an exciting new “experiences” program where local experts can show visitors places and happenings that usually only denizens of that city could know and love.

Our founder, Jake Kroeger, is indeed hosting one of those experiences, a “Comedy Bureau Ride Along”.

Basically, we here at The Comedy Bureau see the best comedy in LA seven nights a week to keep tabs on what’s going on and what’s worth telling our readers about.

So, if you want to see what we see and hang with us as we make the rounds around the LA comedy scene, you can book us for a night here.

For your money, we’ll cover all admission to shows we go to, let you grab a ride with us from spot to spot, and hang with us after with comedians wherever that may be. Think of it like a police ride-along, but it’s for comedy and it’s with one of the most highly regarded authorities in LA comedy.

As you can see above and below, we really go wherever we have to for a hearty laugh. There are limited spots for our ‘ride along’, two per night in fact, and we’ve already got people reserving their spots. So, you might want to act on this fast.

Again, get more details and reserve your spot for the experience right now right here.

Alex {Hanpeter] and Jude [Tedmori] having a bit of innocent, “harmless” fun at their “What A Time to Be Alive” show, Photo by Joel Mandelkorn 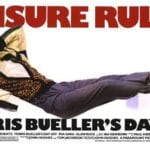 The Vista Theatre in Los Feliz is hosting along with Nerds Like Us a special 30th Anniversary screening of Ferris Bueller’s Day Off on Friday, April 1st at midnight.

No matter what hijinks you’re pulling on April Fool’s Day, you should probably go to this if you’re in LA.

2) It’s official, Funny or Die & Earwolf have joined forces today to bring comedy to the online masses on the video and audio fronts. There’s even a “How Podcasts are Made” FoD exclusive to commemorate the event. Unfortunately, according to sources, will not be going by Funny Ear and/or Die Wolf.

Where Do Podcasts Come From? – watch more funny videos

3) In case you haven’t noticed, we’ve done a little housekeeping in updating both our calendars at the top of our main page as well as our comedy venue calendar list. Now, you can have ready knowledge of what’s happening comedy wise throughout the current month in LA as well as ready links to the Comedy Sportz LA Theater, Dangerfield’s 2, and Good Time Comedy Club. Or you could just check the Morning Debriefing everyday… your choice?

4) This new episode of Henry’s Kitchen makes me want Henry Phillips to have a restaurant.

5) Patton Oswalt didn’t go to the Toronto International Film Festival and started a hashtag on Twitter #FakeTIFF2011Films and then hilarity insued.

6) In case you had a pool going, here’s the comedy winners at the Creative Arts Emmys.

7) Jena Friedman, who now writes for Letterman, posted a new episode of her hilarious series Ted & Gracie that everyone should watch.

12) I’m not sure what it means that I saw more people tweet, update their facebook statuses, blog, etc. about the series finale of Entourage than 9/11.

2) The Midnight Show’s take on how to deal with your finances. If only we only all had readily available snakes…

3) Open calls for LA comedy folks:
–Eagleheart needs extras for this Tuesday 9/13.
–A12thWayToReachMe is looking for participants in a run through of a new games show next Thurs.
–@AlisonAgosti needs a dude to play “shirtless male groupie” for a Channel 101 video.

4) The Big Fish Bar & Grill officially has an open mic starting next week.

5) Though we really don’t approve of the Roast of Charlie Sheen (see why here), please follow the hilarious Justin Ian Daniels on Twitter @funnyjustin as he will be at the taping tonight interviewing people for Laughspin.

9) There was so much drama at open mics this week, I almost thought that Last Comic Standing was coming back with a whole new format.

1) Yesterday marks the last day of Morgan Murphy’s (@morgan_murphy) stint on at Late Night with Jimmy Fallon and her gradual return to the West Coast.  Be on the look out, but I’m sure you won’t have to look too hard because she’ll probably going up everywhere and still have that hair.

2) Take your star map, if you still have it, and go burn it.  THEN, watch Bill Burr’s tour of Los Angeles.  You still see most of the same stuff, but the jokes are actually done by a highly regarded, paid professional.

4) The Comedy Bureau hasn’t determined who the Tip of the Hat is going to today, but assuredly, it is going to someone.  I’m sure all of you are on the edge of you seats.

6) To all those tweeting, posting, and making fun of Rebecca Black: Soundscan doesn’t differentiate whether you’re listening to her ironically or not. STOP TERRIBLE MUSIC.