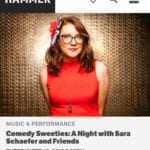 As comedy at The Hammer Museum worked so well with Aparna Nancherla last year, the renowned museum will be having yet another night of comedy within their walls featuring another round of some of our favorites including Sara Schaefer, Kyle Mizono, Janine Brito, and Naomi Ekperigin.

No matter what you’re situation is on the day before Valentine’s Day, this ought to be a night that you won’t want to miss.

The event is free so long as you RSVP, which you can and should do here. 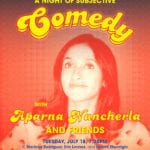 Aparna Nancherla, who you should both know as a fantastic stand-up comedian and one of Twitter’s best @aparnapkin, is returning once again to LA next month, but will get to do so with top billing at UCLA’s Hammer Museum.

Marlena Rodriguez, Erin Lennox, and Naomi Ekperigin will be joining Aparna and, best of all, it’s free since all programs at Hammer are free. 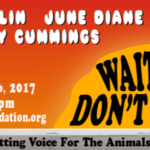 “Wait Wait…Don’t Kill Me!” combines a quiz show, the talents of Lily Tomlin, June Diane-Raphael, Casey Wilson, Whitney Cummings and Craig Ferguson, the hosting skills of Paul Scheer, animal trivia as curated by Scheer, and a benefit for Voice For The Animals Foundation.

If any of that’s up your alley, you might want to catch this event this Saturday night at UCLA’s Royce Hall at 8PM. Tickets range from $25-$100 and you can (and should) get them here. You can RSVP for tickets for the event here. 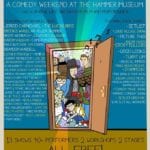 Authors going head-to-head, comedians and respected literary figures both judging, and an overall good time is what you can expect from Literary Death Match.

Best of all, this next one is free to attend. More details available here. 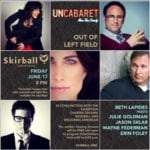 Tickets are $15 for general admission, $12 for Skirball members, and $8 for full time students and you can get them here.

As we expected, more theaters jumped on board for screening The Interview today after The Alamo Drafthouse in Dallas/Fort Worth and The Plaza Theatre in Atlanta, GA announced that they were going ahead with a Christmas day screening of the movie.

Theaters from around the country from the likes of Champaign, IL to Puerto Rico to Baltimore, MD, to Tempe, AZ, to Ann Arbor, MI, and way more have also joined in. Deadline has an up-to-date list here.

For now, Rogen and Goldberg probably have created the most patriotic dick jokes, given the circumstances of The Interview’s release, in the cinematic canon.

One of the longest running open mics not only in LA or even in the U.S., but we’d bet in the whole world, Westwood Brew Co hosted by Robert Yasumura and Vance Sanders, is coming to a close as a result of the entire bar/restaurant being sold.

There is so much history that small triangular stage with no A/C has been witness to with some of comedy’s biggest names gracing its stage at one point or another with plenty of comedy’s soon to be biggest names cutting their teeth or honing their craft there over the last few years.

Don’t miss its swan song night on July 23rd that we’d suggest to get there definitely before 8 for how packed it will be.

5) And the return of Lewis Black came to be…

10) LA Weekly featured the Top 5 most annoying billboards and Whitney wasn’t on the list. I call shenanigans.

2) Here’s a trailer for Marc Maron: The Voice of Something, a documentary by Jodi Lennon following Marc Maron in NYC right after 9/11. Basically, you’re going to watch it whenever it comes out.

3) Bradley Fojas claims the following video is a waste of five and a half minutes of your life. Maybe it is, but at least it’s hysterical.

4) Tonight on the late night circuit, Aubrey Plaza will be on Conan (TBS 11PM) and Don Rickles will be on Jimmy Kimmel Live (ABC 12AM).

7) Read Taki Magazine’s much more elaborate plea for comedians to make jokes and not apologies than the ones we wrote for Laughspin (who they sort of throw under the bus) here and here.

8) Patton Oswalt gets a B+ from the A.V. Club for his Finest Hour.

9) There will be no more Ultimate Free & Cheap LA Comedy List from Wisepix.com because Wisepix.com has discontinued as a site. Please check here for all your LA comedy show listings.

13) This might be way out of context, but I think I laugh way too hard at Forgetting Sarah Marshall while watching it alone.

1) Date Rape Audience Monologist’s (from DCM ASSSSCAT) identity is revealed. Also, he left Facebook like that’s going to do something.

4) Did you know Jim Jefferies & Eddie Ifft had a podcast? Now you do.

5) Damn, we love The Midnight Show. Here’s their sketch about home invasion.

6) So the Internet convened yesterday and decided Joe Mande wrote the funniest thing (that just happened to be about Gilbert Arenas).  We agree.

7) Read how Jeff MacKinnon is having all the fun in Edinburgh at the Fringe Festival in his 12th and 13th parts of coverage for Laughspin.

8) Splitsider makes a solid list of podcasts that should exist. We could go on about adding more, but our first thought was that Joe Wengert should have a podcast called “Before Therapy”.

9) Mainstream comedy success? More like… I have no fucking idea what a large cross section of America wants in their comedy.

13) Because I couldn’t get up at an open mic on a college campus, I felt like Banksy in Exit Through the Gift Shop when he regrets encouraging everyone to be an artist.

1) David Letterman responds to his recent death threats the only way he knows how… a Top 10 list (strangely, the Jew accusation is not brought up).

2) Wyatt Cenac is a Comedy Person with a comedy album out today. Decent people pick it up now.

3) Lewis Black is coming back with “In God We Rust”.

4) Connected Comedy has a little something to say about “stage time” and what comedians should expect.

5) Jeff MacKinnon doesn’t rest on the 7th day at the Edinburgh Fringe Festival.

6) Jon Dore, the Sklar Brothers, Kaitlin Olson in a mask, Josh Haness, Tig Notaro, and more all make for a great pilot for Crackle’s Held Up.

10) “I know how to wrap them around a bat.”-Blaine Capatch in response to Marc Maron’s question of how he could do his act on the road several years ago.

2) Sean O’Connor will take the stage on Conan tonight TBS 11PM.  Watch, set your DVRs, or check back here tomorrow.

3) Humblebrag’s got their Power Rankings for August and we just have to say, “Really, Steve Nash? Really?”.

5) The national storytelling series, The Moth, just announced their fall themes for the upcoming months of their storyslams/storytelling open mics.

6) Marc Maron gets interviewed by Splitsider and has “This Has To Be Funny” reviewed by A.V. Club. In talking to him in passing last night, we reaffirm our answer, “Yes Marc, it definitely works as an album.”

7) Steve Heisler explains analytically why should see some unrecognizable faces and unknown names on the big screen.

8) “Jumping the Shark” = “Going Harold & Kumar”-This is probably our most incendiary post to date at the Nerdist, but what’s more amazing than the grab bag of vicious comments is the fact that people actually stuck around after the credits of Harold & Kumar Escape from Guantanamo Bay.

13) Yet another day passes where I fail to see Attack the Block. Damn it.

Good Medicine Comedy Fundraiser for She Safe We Safe (Live-stream)

Clowns in the Park