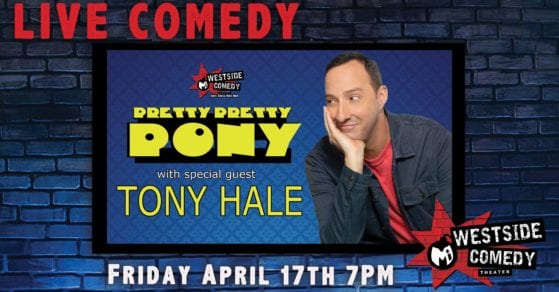 Pick of the Day: Pretty Pretty Pony with Tony Hale

Throughout our tenure, Pretty, Pretty Pony has been one of our favorite improv groups throughout LA’s vast collection of improv teams (we even picked them for one of our annual 100 Best Things in Comedy We Were Witness To in No Particular Order).

Housed at Santa Monica’s Westside Comedy Theater, they were occupying a monthly slot featuring great guest monologists and a razor sharp team of some of the best improvisers around.

The COVID-19 pandemic has caused the Westside Comedy Theater to temporarily close its door, but Pretty, Pretty Pony will keep the show going with one fantastic guest, Tony Hale (Veep, Arrested Development), this Fri. Apr. 17th on WCT’s Twitch channel. The show is free to watch, but they’ll be taking donations for the theater via voluntary ticket purchase here. 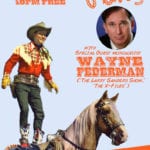 One of our favorite improv teams Pretty, Pretty Pony (Cole Stratton, Vanessa Ragland, Joey Greer, Chris Alvarado, Atul Singh, Ed Roe) has been together for five years and are celebrating the occasion on their monthly Westside Comedy Theater show on Monday, August 8th with special guest, the one and only, Wayne Federman. 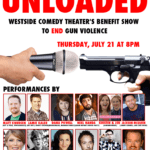 Tickets are $35 and available right here. 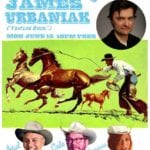 Improv team Pretty, Pretty Pony was and is still one of our favorite things. More details here.

Sean Green does a sports themed talk show with a stacked line-up that knows how to break down sports comedically for non-sports fans and sports die hards alike.

We’re going back into a wormhole with our show that cross dimensions of jokes, bits, meta jokes and bits, and even something deeper and more hilariously bizarre than that.

Join us, Matt Kirshen, Pretty Pretty Pony, and Matt McCarthy on Tues. July 14th at Westside Comedy Theater at 9PM for the journey that will probably change your life, but will most certainly make you bust up with laughter.

It’s only $5 to strap in and go into the vast, undiscovered territory of deep(?) comedy. Get your tickets here.

We’re Going Into Another “Wormhole” on July 14th

While an unmanned Space X ship exploded recently, we’re just going ahead with jumping into deep space, comedic deep space that is, and headed into other comedic dimensions again with our show/experiment Wormhole.

Now, we’re happy to announce that the likes of the hysterical Chris Fairbanks who you’ve most certainly enjoyed on Conan, and some of Westside Comedy Theater’s finest improvisers will be leading us through the new, uncharted dimensions of the show.

Don’t miss out on going to somewhere potentially way cooler and definitely more fun than Mars, especially because it’s free, by going to Wormhole this Sun. at El Cid, doors 7PM/starts 8PM.

The Westside Comedy Theater Launching Its Own Comedy Podcast Network

The Westside Comedy Theater Launching Its Own Comedy Podcast Network

Whether the dust is still being rustled up or clearing from the comedy podcast boom is unsure, but the model of gathering podcasts under the umbrella of a network seems to be a worthwhile path for the medium right now.

Next week, Santa Monica’s Westside Comedy Theater is starting its very own podcast network with many really funny comedians that have made their way through the LA comedy scene over the last few years including: Rob Gleeson, Mr. Goodnight, Tom Sibley, Josh Covitt, Chase Bernstein, Tushar Singh, Neel Nanda and more.

They’re having a free launch party next week on Thurs. to meet all their new podcasters at 7PM if you’re curious (and we’re suggesting that you should be)